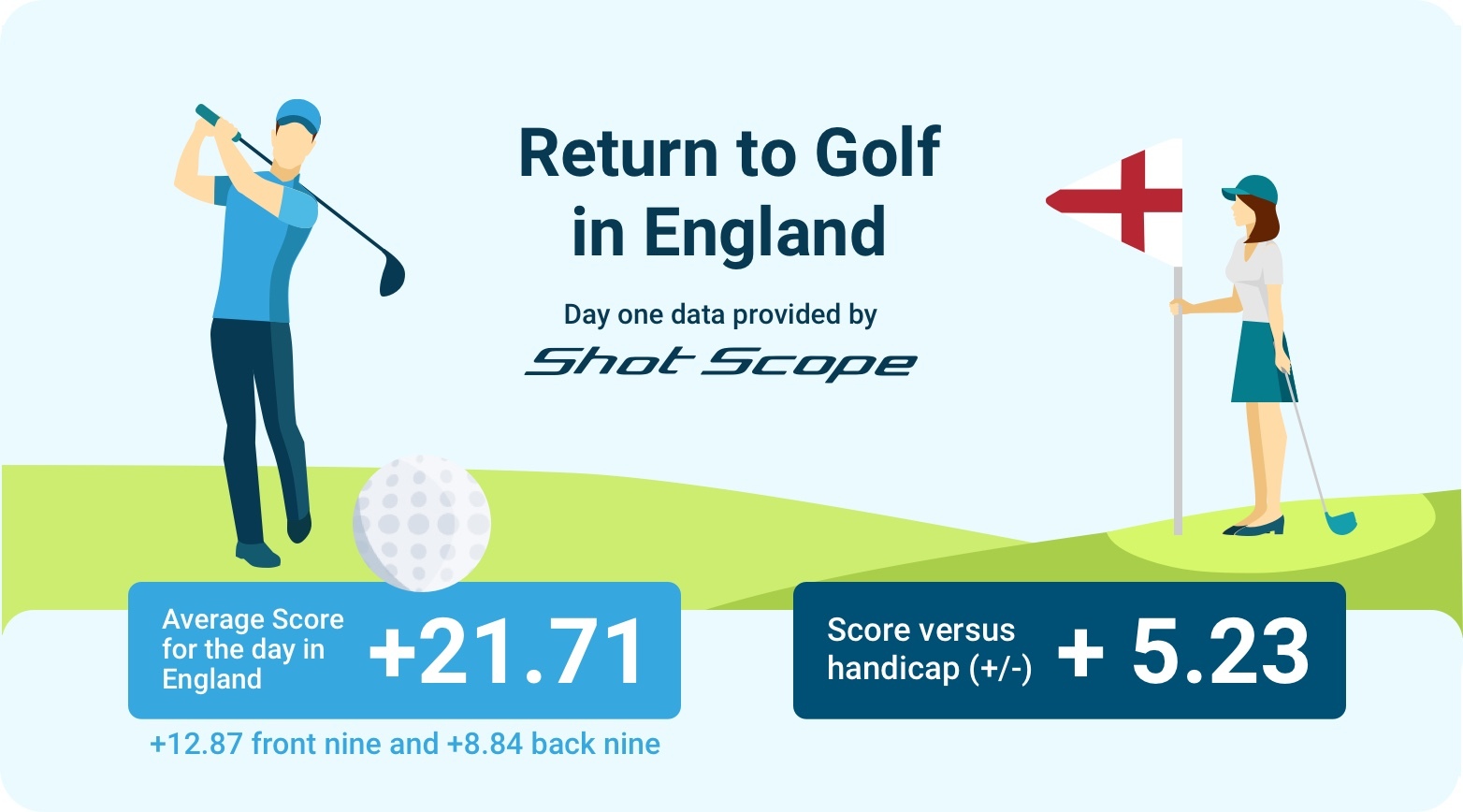 Happy, but rusty golfers flood back to courses as golf returns in England

Shot Scope, the industry-leader in advanced GPS and automatic shot tracking technology, has revealed some amazing statistics that show just how rusty England’s golfers were after nearly three months away from the course when clubs reopened yesterday.

Shot Scope recorded more than 446,000 shots yesterday as restrictions eased; a figure that represents its largest amount of tracked shots on a single day in England. This correlated to 4,788 rounds played (England), eclipsing the previous daily record in the country by over 2,500, while a Shot Scope watch was used to track performance at over 75% of courses. The company have combined the data from all of their users that teed it up to paint a picture of the long-anticipated return to golf, just 24 hours after the first ball was struck.

Rather predictably, the majority of golfers in England were rusty after their time on the side-line, with the average score coming in at +21.71, compared to an average of +14.35 last year. This resulted in a score average +/- handicap of +5.23.

“With the systems we have in place, our team were able to quickly extract the data to provide a snapshot of what the first day back on the course looked like for Shot Scope users throughout the country. The stats made for some very interesting reading,” commented Shot Scope CEO, David Hunter.

Golfers in England had been thinking about their first tee shot ever since the latest government announcement on restrictions easing, and it is fair to say their worries were not misplaced! According to Shot Scope, only 30% of users managed to successfully find the first fairway, down 18% on the average, and a staggering 39% appeared to have suffered from a dreaded first tee slice to the right.

It appears that driver was the club of the day from the first tee for many golfers on Monday (for those who played a par-4 or par-5), with an incredible 94% of players opting for the big stick.

Using its new strokes gained platform, Shot Scope was able to determine that, while the majority of users found trouble from the tee more often in comparison to last year, it was on the greens that they saw the biggest dip in performance. Golfers lost over 40% more shots due to poor putting performance against the Shot Scope average for 2020, with strokes gained putting against a scratch golfer dropping from an average of -3.52 to -5.08.

Promisingly, the statistics show that there is hope. The average score recorded on the back nine, for golfers that completed all 18 holes, dropped by 4.03 strokes, showing a marked improvement as they settled into the round.